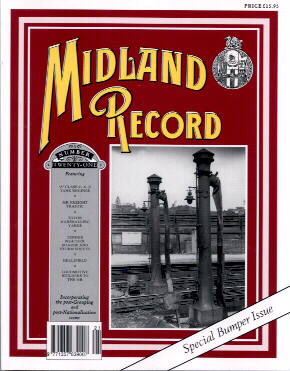 Midland Record was launched in 1995 as an occasional journal containing 80 pages per issue. Each journal is designed to stand-alone but at the same time to be part of an ever-expanding archive that covers the history of the Midland Railway. The content will appeal to railway historians and modellers alike and has been the subject of many excellent reviews from leading authorities in the United Kingdom.

Edited by Bob Essery the editorial team for Midland Record includes Dave Hunt, who is also editor of the associated Midland Engines series and Chairman of the Midland Railway Society.

Below are details of the contents of each issue of Midland Record.

Derby Works Official Photographs (From the collection of the late David Tee) ; The ‘1528’ Class 0–4–0 Shunting Tanks by David Hunt — A detailed review of these Deeley designed shunting engines introduced in 1907 and which lasted into the 1960s. Profusely illustrated with official drawings and photographs from MR, LMS and BR days. ; Working the Stonehouse to Nailsworth and Stroud Branch Lines by Bob Essery — an illustrated history of the Nailsworth and Stroud branches concentrating on the working of the lines covering the period from their openings in 1867 and 1885 respectively to their closure to passengers in 1947 and complete closure in 1966.